The last couple of times i have been out have proved to be pretty good. With the hot weather we have had i have been sitting around the different cattle water tanks and i have been getting some results.
Now the trees are in full leaf it is pretty hard to get near and pigeons or magpies as they see you well before you can see them, so if you can find a water source on your permissions it is worth putting a single decoy near it and you will find you can pull the odd pigeon in.

The last evening i decided to put one pigeon and a magpie decoy about ten yards from the tank. I always try to keep the decoys a bit away from where you want them to land as i feel they soon pick up on it not being real if its too close. I had been sitting for about fifteen minutes when my first pest presented itself. It was a magpie that had been flying back and forth for about five minutes, it had checked the decoy out a few times and finally decided all was ok. It had landed on a post right near the water tank and from thirty yards it was a nice simple shot as there was no wind to worry about. I had placed the cross on its eye and the mozzie soon knocked it off its perch.
I swapped the decoy for the real magpie as you can not beat the real thing and sat in wait for the next shot.
I didn`t wait long for my next one to arrive, a pigeon flew straight in for a drink from the tank, again it sat nice and presented me with a similar shot to the first and he fell to the floor thanks to the pellet hitting its skull smack on.

Again i changed my plastic decoy for the real thing. Ten minutes had passed befor the next pigeon flew in, this time it landed a couple of yards from the decoy. It had walked about for a few seconds looking , and checking the area out then flipped up onto the drinker. The crosshairs were soon settled on him and another smack sent pigeon number two to the floor. I set this pigeon near the other one to make it a little more realistic with a pair feeding.
I had been waiting a while until the next pigeon flew into the decoys, he was very interested in one of the decoys and started to get close, it had been walking about a bit but i could get a shot on him from behind,  the grass was covering his head a little but i had a nice shot between his shoulder blades . The pellet hit its mark in a split second and the pigeon fell forward , its tail lifted for a couple of seconds then nothing the pigeon was stone dead.

Time was getting on and the pigeons were now going to roost so i packed up and headed off . It proved that you can still keep in touch with the pests if you sit back and watch their feeding habbits. I will be back again and im sure i will get a few more to keep the farmer happy. 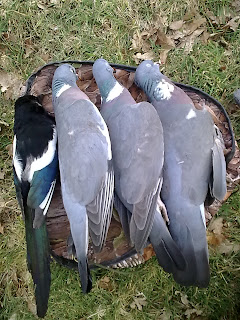 This month in AirGunner i go out with my dad and help him get a few squirrels, he is using his shotgun and you will be suprised who comes out on top.
Posted by Eddie Jones at 11:17